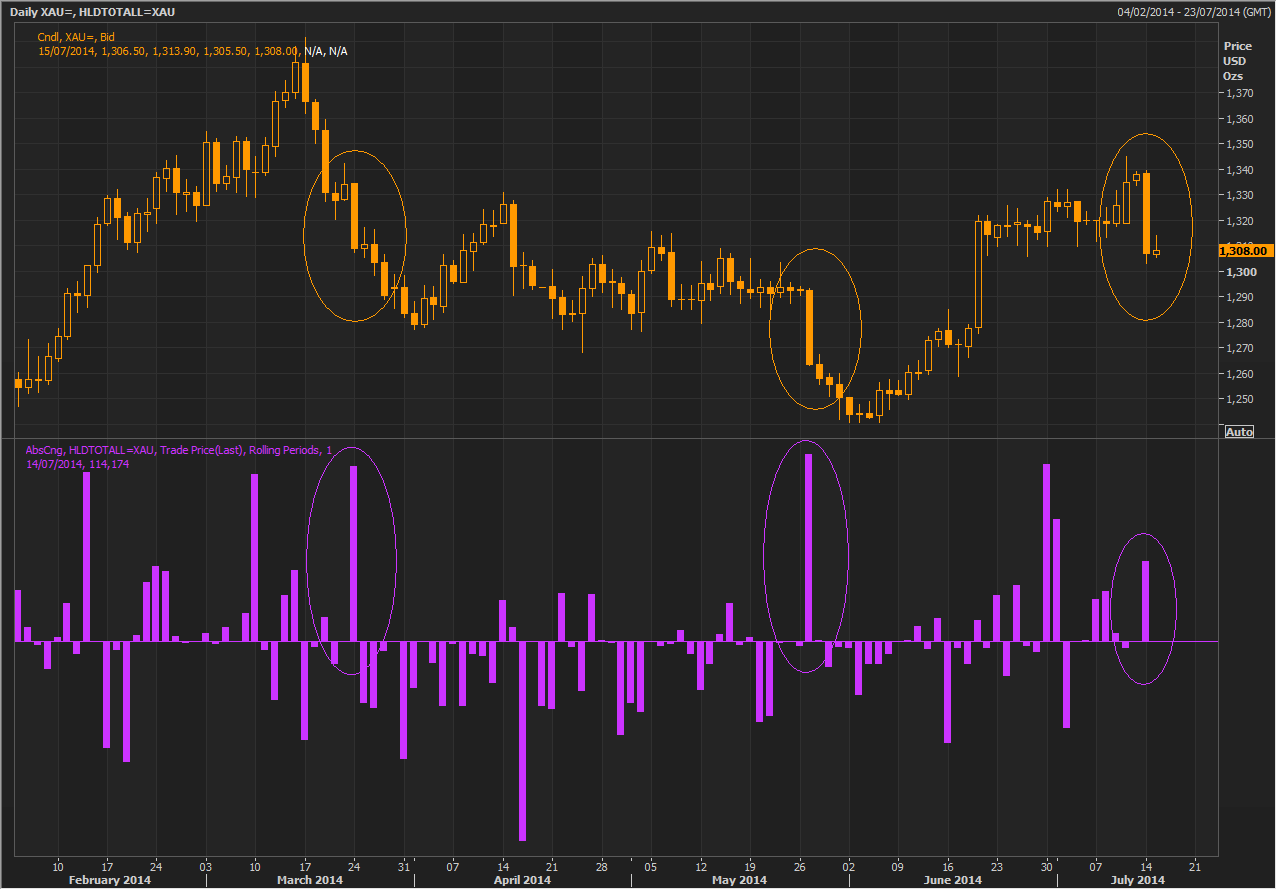 Gold’s sell off yesterday was again due to concentrated selling on the COMEX. The sale of over 17,000 contracts or over $2.3 billion worth of gold futures contracts in minutes led to gold falling again. Support is likely to be found at previous resistance at $1,280/oz.

The sell off has led to increased demand for physical gold by buyers globally. In China, the world’s largest importer of gold, the sell off was greeted by Chinese buyers as local premiums edged up to just over $1 an ounce on the Shanghai Gold Exchange (SGE) from a small discount in the previous session.

Gold imports into India surged in June where there was a 65% annual rise in gold bullion imports.

Bullion is India's second-biggest import item after oil and was one of the principal factors in putting it on the brink of a full-scale balance of payments crisis last year.

In a desperate bid to trim a gaping current account deficit, India last year increased import duties on gold and imposed a rule that required a fifth of all bullion imports be re-exported.

Those measures had crimped official supply and pushed up premiums in the domestic market, sparking a huge rise in smuggling. However, a strong rebound in gold imports will likely mean the curbs stay in place for some time.

India’s huge appetite for gold is due to still very high levels of inflation which are still over 7% - retail inflation in June hit 7.31%, and the continuing depreciation of the rupee.

Gold holdings in exchange-traded products rose 9.7 metric tons yesterday to 1,736.9 tons, the most since October 2012.

Gold price drops this year have led to a marked increase in demand for gold as seen in very large increases in ETF holdings (See chart - Orange is Gold, Purple is absolute change in gold ETF holdings). The smart money in Asia, the West and globally continues to use price dips as an opportunity to allocate to gold.

Leaders of the BRICS emerging market nations launched a $100 billion development bank and a currency reserve pool on Tuesday in their first concrete step toward reshaping the Western-dominated international financial system.

The bank aimed at funding infrastructure projects in developing nations will be based in Shanghai, and India will preside over its operations for the first five years, followed by Brazil and then Russia, leaders of the five-country group announced at a summit.

The new global bank is another sign that the dollar’s days as reserve currency of the world are coming to a close.

Gold gained in London as investors were concerned re military conflict in Ukraine and Gaza. Palladium held below a 13-year high. 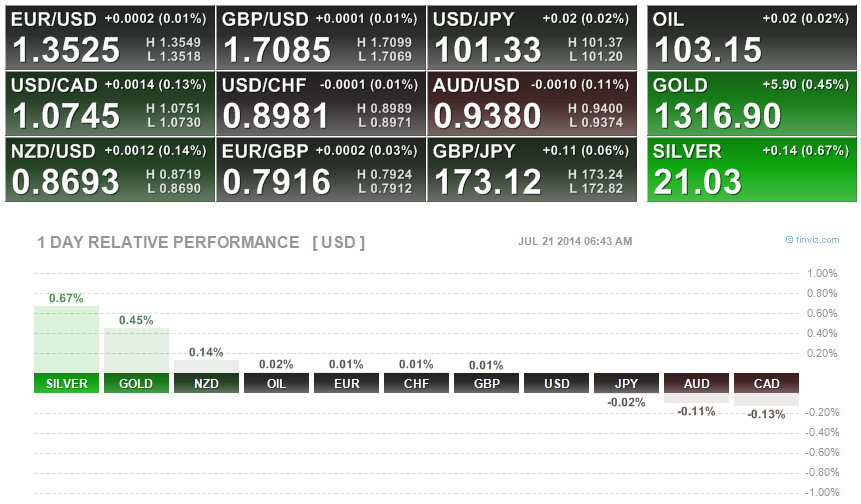 Gold has its first weekly loss in seven last week and fell 2.1%. Most of the falls came on Monday when there was more unusual trading and concentrated selling despite no market moving data or news. The decline last week ended the longest run of weekly gains since March.

Gold futures trading volume was 40% below the average for the past 100 days for this time of day, according to Bloomberg data.

European stock markets fell across the board today, concerned by an escalation in tensions between Russia and the West and reports the Ukrainian army set to escalate militarily and was moving on a major rebel stronghold.

Russian President Vladimir Putin is facing intensified international pressure after pro-Russian rebels were blamed for downing a passenger jet on July 17, killing 298 people on board. Putin is facing pressure to respond to claims that a Malaysia Airlines jet was downed using a missile supplied from the country. The U.S. and European Union last week tightened sanctions against Russia over its annexation of Crimea and its role in backing rebels in Ukraine.

Geopolitical risk emanating from the Ukraine and the Middle East has contributed to safe haven demand and gold’s rebound 9.4% gains this year. Currency warslook set to intensify as financial and economic tensions build between Russia and China and western nations.

Officials led by Mark Carney, the Bank of England governor, are attempting to bridge sharp differences among leading G20 countries as they prepare a landmark set of proposals aimed at tackling the problem of “too big to fail” banks according to the Financial Times today.

Talks under the auspices of the global Financial Stability Board (FSB) over the summer are approaching a key stage as officials aim to clinch an agreement on bail-ins and the bailing in of creditors including depositors of banks.

Finance officials are hoping to pave the way for proposals to be tabled at the G20 leaders meeting at the Brisbane summit in November.

The issue is of major consequence to globally systemic lenders such as Citigroup, Barclays and BNP Paribas, as some will have to issue billions of dollars of fresh bonds earmarked to carry losses.

The issue is of major consequence also to depositors who could see their savings confiscated as happened in Cyprus.

The complexity of the topic and differences between countries’ legal regimes and corporate structures are raising questions over how detailed any framework will be.

Japan is one of the countries with problems with bail-in plans amid concerns that they are not easily compatible with the structure of its banking system. Its banks are heavily deposit-funded, and officials are uncomfortable about the idea of bail-ins.

Japanese banks are already vulnerable and bail-ins could hurt consumer sentiment in the already struggling Japanese economy. Concerns in Tokyo are said to be sufficiently profound for it to push its case right up to the summit itself.

China is also sceptical about the notion of private sector bail-ins given its banks are state-owned. “There are some very entrenched positions,” one official told theFT.

Russia is likely to oppose the coming bail-in regime as well as many other large creditor nations.

Mr Carney, who also chairs the FSB, said in March he wanted to “break the back” of the too big to fail issue this year. He said regulators sought by Brisbane to have cracked two major issues – on the loss absorbing capacity that big banks have to hold and on contractual provisions in derivatives contracts.

Bail-ins are coming to banks in the western world with consequences for depositors.

about 8 years ago
Re: Excellon produces 636,713 oz AgEq in Q2 at La Platosa
Excellon Resources

Down 4 cents today but on absolutely no volume. I still maintain the price of silver will rise at least a few dollars this year. Supply & demand fundamentals are completely out of whack.

Furthermore, the company will be holding a conference call and webcast on Wednesday, Aug. 13, 2014, at 11 a.m. PT (2 p.m. ET). To participate in the conference call, please dial the following:

Participants should dial in 10 minutes prior to the conference. Click on webcast on the First Majestic homepage as a simultaneous audio webcast of the conference call will be posted on the company's website.

MONTRÉAL, QUÉBEC--(Marketwired - July 22, 2014) - Orbite Aluminae Inc. (TSX:ORT) (OTCQX:EORBF) ("Orbite", or the "Corporation") announced today it has received a first installment of $6 million related to its 2012 Québec Investment Tax Credits. The funds were due to the Corporation in relation to equipment purchased for manufacturing and processing in the Gaspé region during the 2012 financial year.

This first $6 million and subsequent funds the Corporation receives upon reimbursement of the 2012 and 2013 investment tax credits will be deposited in a segregated account and serve as security for the convertible debentures issued in 2012. The Corporation anticipates receiving the balance of its 2012 investment tax credits during the remainder of 2014, with payments for 2013 expected in 2015.

Prior to this payment, the Corporation had a balance of $27.7 million in Québec Investment Tax Credits to be received, of which $19.7 million relates to the 2012 financial year, $6 million to the 2013 financial year, and $2 million for 2014 as of the date hereof. The Corporation anticipates accruing another $2.3 million during the remainder of 2014 such that total Québec Investment Tax Credits under this program should reach approximately $30 million following completion of its HPA facility at Cap-Chat.

about 8 years ago
Re: Today's Trades --- Final Tally
Carpathian Gold

Hello SMF. Are you there? Miss your daily posts.

about 8 years ago
Show more